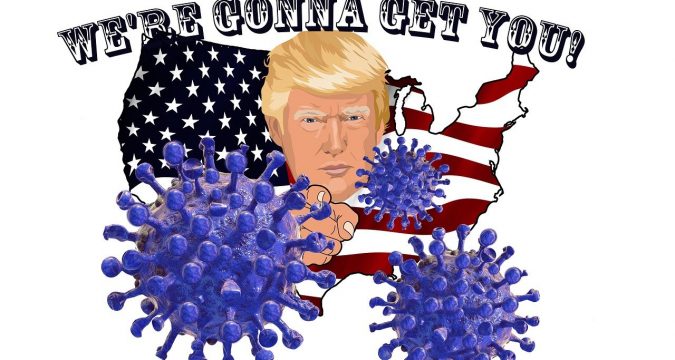 As news of the U.S. President Donald Trump testing positive for COVID-19 hit, it put investors in a risk-off mood and this prompted the S&P 500 to be a lot lower on Friday. The news has only added to uncertainties that surround the looming presidential election in the country. Earlier in the session, all three major stock indexes in the U.S. were sharply lower, but reassurances from the White House that the President is not incapacitated helped pare losses. In fact, the index rebounded further after an announcement by Nancy Pelosi, the U.S. House of Representatives Speaker, about an ‘imminent’ agreement to provide the airline industry with another $25 billion as a form of government assistance.

While all three stock indexes were lower, but gains in the cyclical stock that are economically sensitive helped make up for Dow’s losses. Late Thursday, Trump tweeted that he had tested positive for the coronavirus and would now be in quarantine for at least two weeks. This has compounded the unknowns for a market that has already been quite volatile. Experts said that this could end up changing the landscape because it is another insecurity when the country is heading towards a contentious and tight election. On Friday, data that was released showed that the recovery seen in the labor market could be losing steam.

The largest loss was experienced by eleven prominent sectors in the S&P 500 whereas the biggest percentage gains were experienced by industrials and energy. There was also a reversal from most recent sessions, as market leaders were down, including Microsoft Corp, Apple.Inc. and Amazon.com. They added the heaviest weight on the Nasdaq and S&P. The possibility of additional government aid caused commercial air carriers to increase, as the S&P 1500 Airline index grew by 1.7%.

There was a 6.3% decline in the share price of Tesla Inc. after investors were overwhelmed by the third quarter deliveries of the electric car maker. A fiscal aid package worth $2.2 trillion was passed by House Democrats on Thursday, but it is highly unlikely that the Republican-controlled Senate will approve the bill. Partisan wrangling about the details and size of a new stimulus package have stalled, even though it has been two months since the expiry of unemployment benefits for millions of people.