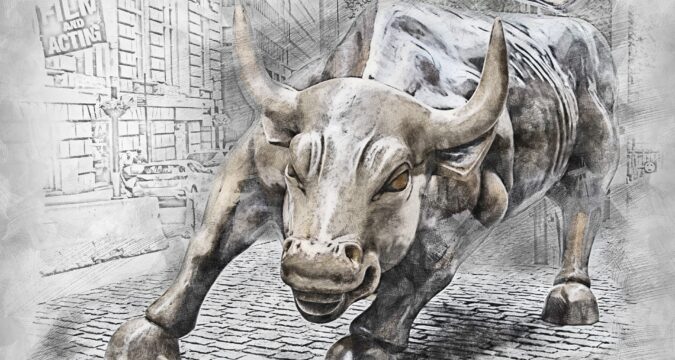 Wall Street’s charging bull statue is not only a representative of the biggest banks in the world, but it is also a popular tourist attraction. Last week the visitors of the Bull were met with a strange and unexpected host. It seems that a Dogecoin statue has been placed in front of the Wall Street monstrous Bull. The clever artist behind this idea is a Twitter artist who goes by the name of Camilo on Twitter.

The dexterous execution of the life-sized Inu Shiba breed dog seems to be in a stare-down contest with the charging bull. The presence of the petite dog in front of the gigantic Toro represents it as the underdog in the narrative. The dog statue also dons a collar that names it DOGE and has engravings that read “Fate loves Irony.” The statue also says that its residential address is the Moon; these are allusions to Elon Musk’s catchphrases while referring to Dogecoin.

What is Next for Dogecoin?

The placement of the charging bull is packed with subversive meaning. It was first illegally smuggled into the vicinity as a protest against Black Monday Market Stock Crash in 1989 by Arturo Di Modica. Later on, it was legalized and granted a permanent position. The current position of Dogecoin is no different. On the one hand, decentralized currencies are under the constant threat of being regulated by the government. On the other side, the Dogecoin market was also thrashed after its SNL debut.

At press time, Dogecoin is trending at $0.5 and is changing hands between the 5th and 4th largest cryptocurrency. The market cap of DOGE is valued at $65 billion. However, several doge clones and parody tokens have entered the market, i.e. Woofy, Dogelon, Bone, Leash, SHIB, and many more. These altcoins have been labelled as Doge killers. In case the price of the meme cryptocurrency takes a nose dive, it would go down in history as a reminder as one of the biggest 2021 FOMO mishaps.

Tesla Inc. to Add Dogecoin in its Crypto Arsenal

Tesla Inc. first shocked the world by announcing the addition of $1.5 billion worth of Bitcoin into its balance sheet. In the same month, Tesla CEO Elon Musk introduced the facility of accepting Bitcoin as payment for Tesla. He also promised his followers that he would not cash out the Bitcoin reserves from his customers. However, the Q1 2021 reports showed that Tesla Inc. liquidated 10% of its Bitcoin reserves.

The interest of the tech billionaire was shifted to Dogecoin. After a disastrous SNL debut, the SpaceX CEO hosted a poll on his Twitter account asking people if they want to see Dogecoin being added as a mode of payment. The results from polls are in, out of the 3.9 million participants, 78.2% have voted in favour of the idea with a visible dominance. The results of the poll make it clear that the meme coin could indeed be added to Tesla’s payment options.