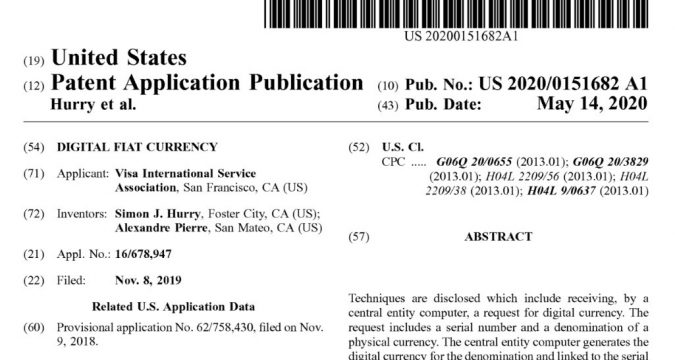 The U.S. Patent and Trademark Office (USPTO) reveals the patent application which the Visa submits to introduce the fiat-pegged digital currency.  The patent unveils the motive that Visa wants to digitize the fiat currencies such as the US dollar, and the system will operate under the central authority or central bank.

The patent titled “Digital Fiat Currency’’ aims to build a central computer that will control the digital currency, and everything including the minting of digital currency and the removal of physical money will record on the blockchain.

Digital Currency will be controlled by County’s Central Bank

The idea is similar to stablecoin when cryptocurrency is backed by fiat such as Tether. “The digital currency may remain tied to fiat currency and may be regulated by a central entity (e.g. a federal country bank). This can prevent the volatility associated with traditional cryptocurrency systems and allow the central entity to maintain control over the monetary system,” the patent application states.

Everything about currency will save on blockchain including the serial numbers of banknotes to prevent any kind of fraudulent activity and to remove the possibility of double digitalization. The digital wallets will store funds and will process payments or transactions. Additionally, these wallets will also store “user profile information, payment credentials, bank account information, cryptocurrency account information.”

The anonymity of an individual should also be kept in mind as the filing stated,” Anonymity may be provided in whole or in part. For example, the name of banks may be recorded on the blockchain in association with a transaction, but not the name of individual users.”

A spokesperson of Visa claimed:

“Visa has a vast global team of inventors and innovators working on cutting edge payment technologies. Each year we seek patents for hundreds of new ideas While not all patents will result in new products or features, Visa respects intellectual property and we are actively working to protect our ecosystem, our innovations and the Visa brand.”