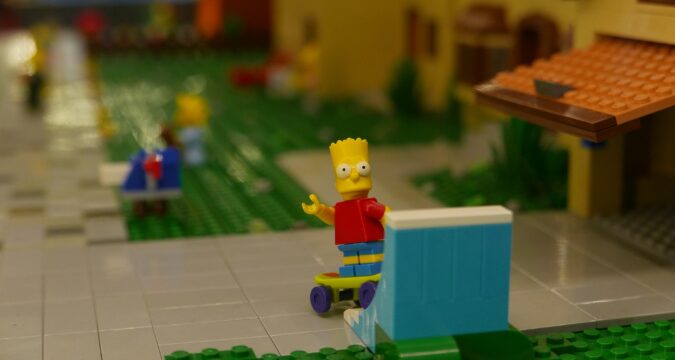 There are hardly any people who are not aware of the famed animated US family, the Simpson. The television series has the longest running time globally and has its 32nd season being aired this year. There are rarely many TV shows that manage to keep the audiences as captivated and interested as the Simpsons for such a long time. The series has a big panel of writers on the list and worth millions of dollars.

The latest episode of the series was broadcasted on 11th April 2021. A meme is going around in the crypto circles where a stock market reporter is seen with a ticker slide at the bottom showing that Bitcoin price has reached infinity. The same ticker also took note of the GameStop stock (GME) transition from one trillion and updated it to zero a few moments later.

The Simpson Tradition of Predicting the Future

The show is based on the premise of the effect of a major social and political event on an average American family’s life. The series’s focal point is to raise important social issues in the guise of comedy and humor. However, there have been several incidences where the show has been noticed to predict several future occurrences that become a reality later on.

There had been several incidences where the show predicted that Donald Trump would be elected the United States president, which transpired into a reality despite all odds. People were also shocked about the correct anticipation of the Greece financial crisis by the show. The Bitcoin savvy episode opens with Springfield’s Mr. Burns setting up an exotic plant-based food company for which Homer, the main protagonist of the season, is hired to manage.

More Cryptocurrencies on the Simpson’s Show

The digital assets were also given a spotlight in a February Simpsons show, with infamous actor Jim Parsons from Big Bang theory cameos, who delve into a detailed explanation of the blockchain technology. The spectators can keep hoping to watch out for more Bitcoin references in the show as it had recently been renewed for two more seasons last month.

Some other animated friends from the entertainment industry like TellyTubies have also used cryptocurrencies to raise awareness about mental illness and depression. The idea of Bitcoin reaching infinity is not a strange concept or a new idea for Bitcoin whales like Michael Saylor-MicroStrategy and Kraker CEO Jesse Powell. Like many proponents of the flagship cryptocurrency, they think that growth possibilities are limitless since the US dollar is bottomless.